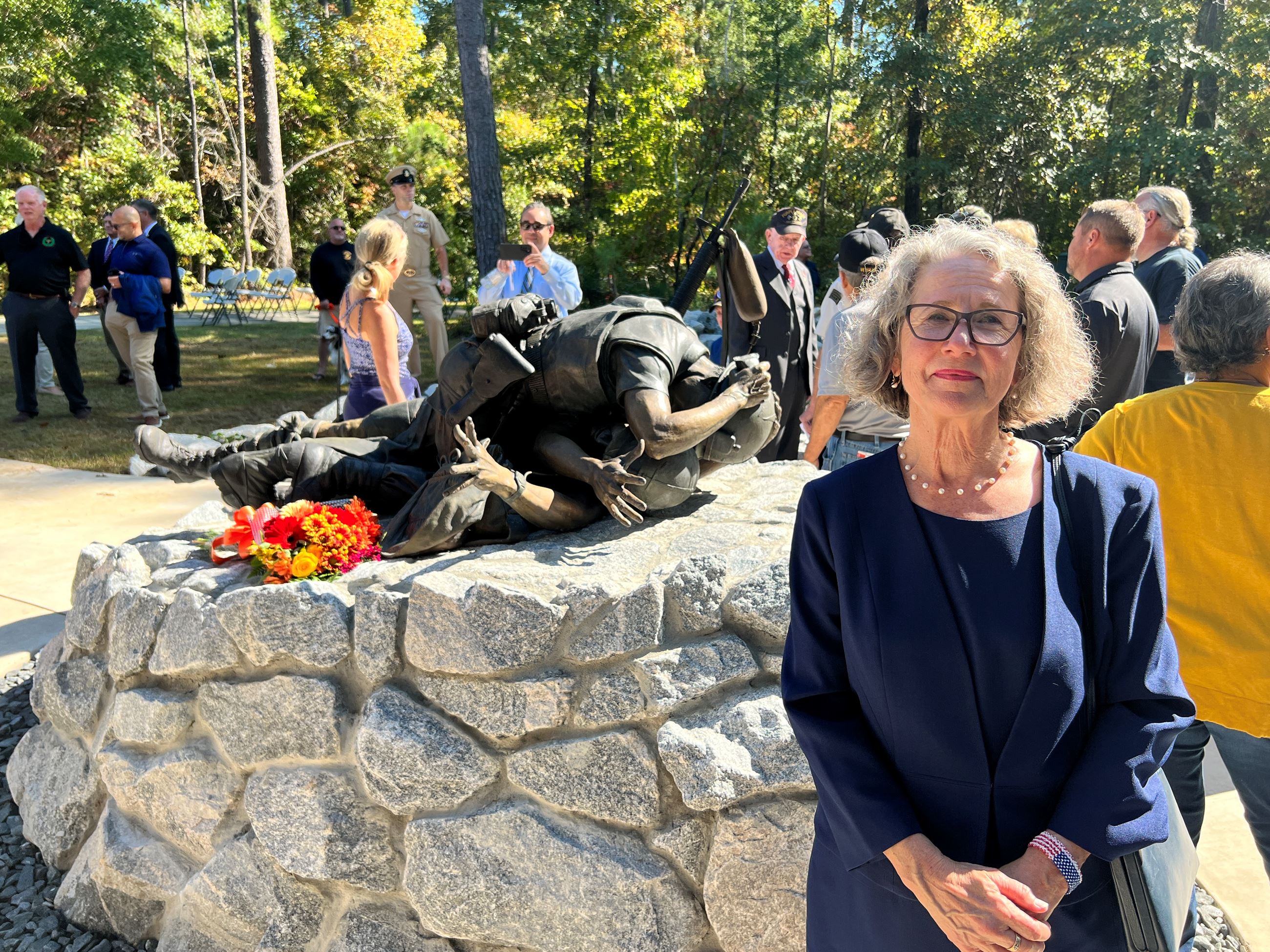 As the home to U.S. Marine Corps Base Camp Lejeune, military heritage runs deep here. Our American stories are personal to the people who live here and to many who visit our city.

Located in the heart of Jacksonville, NC at 109 Montford Point Landing Road, Lejeune Memorial Gardens offers a free parking area, paved paths and 24/7 access. The Gardens and Freedom Fountain are beautifully lit and open to the public at night. The Freedom Fountain is located just a few blocks away from Lejeune Memorial Gardens (you'll need to cross the highway if you park there) beside City Hall at 895 New Bridge Street, Jacksonville NC.

For your self-guided tour, download and print this guide to Lejeune Memorial Gardens.

Built with community donations from the City and County, the Freedom Fountain stands at the gateway to downtown Jacksonville and honors those who have passed through Onslow County while in service to our country. The design features a disappearing edge fountain basin framed by a curved wall with arches and large medallions representing the 5 armed services. Flags and fountain jets representing federal, state, and local governments are featured as well as water jets to represent each of the 50 states. Five flag poles were added in 2015 and proudly fly the flags of all branches of the military.

In addition to the memorials at the Lejeune Memorial Gardens, you'll find a large Eagle, Globe and Anchor statue at a reflecting pool. This will eventually become the entryway for the Carolina Museum of the Marine.

Jacksonville’s greenways and trails also wind through Lejeune Memorial Gardens connecting Military bases and City trails. Azaleas fill the park during Spring, and the public can walk the paths at any time.

The 9/11 Memorial features a beam from the Twin Towers, presented by the police and firefighters of New York to the first troops to invade Iraq following the Tuesday, September 11, 2001 terrorist attacks. The Beam is located between the Beirut Memorial and the entry wall to the Vietnam Veterans Memorial. Each year (unless Sept. 11 falls on a Sunday), the Patriot Day Observance on Sept. 11 takes place at the beam at 8:15AM to mark the time that the first of the Twin Towers was struck. This observance is open to the public.

The Beirut Memorial was a gift from the citizens of Onslow County. It serves as a solemn tribute to 273 Marines who gave the last, full measure of devotion in Lebanon at the Beirut Bombing in Lebanon and on the same day in Grenada on October 23, 1983. The names of each man are engraved in granite along with the words “They Came In Peace.” Set in a wooded site with beautiful landscaping, this is a fitting tribute to our military men and women who answer the call everyday without regard to personal safety. Each year, a Remembrance Observance takes place on October 23 at the Beirut Memorial to remember those who gave so much.


This memorial is a tribute of the lasting bond between Marine and Corpsman both on and off the battlefield. The statue, also known as “Doc,” depicts a wounded Marine being treated by a Corpsman who is also shielding him from incoming fire.

A ceremony was held on October 12, 2022 by the memorial The Corpsmen Memorial Foundation to unveil the sculpture by artist Abbe Godwin, who also designed the statue at the Beirut Memorial.

The statue is located at the entryway to the future Museum of the Marine and is the largest 3-D representation of the Eagle, Globe and Anchor statue in the world. Each star on the globe represents places where Marines have routinely deployed.

Our city, the Montford Point Marine Association and others are working to find the families of almost 18,000 black men who were awarded the Congressional Gold Medal but were not aware of America's highest civilian honor due to lost records. Learn more in the 2022 ABC/Disney documentary streaming now.